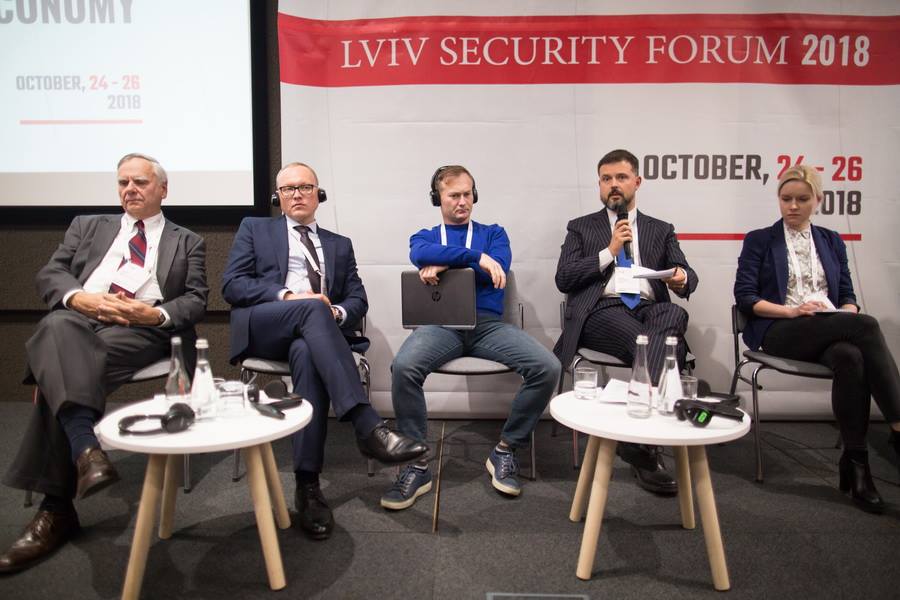 Posted at 18:26h in Lviv Security Forum by admin

Everything that Russia is doing in Ukraine and in the West is enough to understand that global war is already on. Energy, politics, propaganda – Russian intervention is all over these spheres.

Russia is doing its best to more or less comply with the law: it corrupts politicians, who are getting paid from Russia, so-called media are using freedom of speech in order to produce disinformation. That’s the way Russia is working with minds.

Russian propaganda is intensifying confrontation in societies. Russians are using divisive topics: racial issues and gun control in the US, Euroscepticism and euroloyalism in Europe, in Ukraine – language, history and other issues that facilitate confrontation.

EU is taking some measures to confront it – media education, refutation of fake news, etc. But we don’t have time to do these things.

We have to do everything possible to destroy the centre that spreads propaganda. We have to make sure that Putin has no money to spread lies.

One more thing – we have to wake up because China is silently using Russia in order to get into our backyard. And realizing it is very important.

People don’t get that propaganda is not only disinformation. It is also connected to political corruption, abusing minorities, conducting acts of espionage. We have to have a comprehensive strategy in order to fight it. Not many countries take that approach.

Baltic countries took a strategic approach cooperating closely with civil society and private entities in order to combat propaganda. Their governments also have political will not only to recognize propaganda but also seek stronger support within the EU.

Similar cases can be found in Scandinavian countries. The Swedish government, for instance, took measures to prevent possible election meddling, because the electoral process is probably the most vulnerable place.

Another group within Europe – the so-called “awakened countries”. They already were affected by Russian propaganda and started to recognize it. For example – the Czech Republic. The government made a solid review of the security area, consulted civil society, established an action plan for fighting propaganda.

Finally, there are countries in denial of Russian propaganda or collaborating with Russia. In order to work with them, more actions from the EU and NATO are needed.

Victor Rud – The Chair of the Committee on Foreign Affairs of Ukrainian American Bar Association (USA):

Most Western leaders continuously made a massive mistake by making the equivalent between Russia and the USSR. Putin took it and utilized it: the West always called Russia USSR, so we are gathering our lands.

Question: why do we transfer without a second thought ideas belonging to the West to Russia when it doesn’t work. The experience of the West with Russia was never acute or long enough to be embedded in the Western population. We are still unprepared to believe the unbelievable. Listen to the victims, to the truthtellers. West has historically ignored and ridiculed them. Let’s start giving attention to the criminal.

In 2000, it was clear who Putin was and what his goal was to the West. So, the notion of sending sleeping bags to Ukraine on a civilian plane, not on the military is all that was necessary for Putin to understand Obama’s mentality.

The NKGB had tortured people for them to confess to a lie – “a slaughter of the mind”, a reality reversal. The Kremlin has been an expert on it for centuries, it allowed them to develop an empire and control it. In Ukraine the

Russia has reached virtual destruction of the national ethos, a national Stockholm syndrome. Only recently the opposite process has begun.

There is an abundance of tools in countering propaganda. What we are sometimes lacking is the political will to tackle it. And it is probably more true with regard to the Western states.

Sweden and Lithuania found that the answer to propaganda is social resilience. Resilient society is knowledgeable about the existing threats, capable and empowered to act against them. Resilience is built from trust in institutions but also from trust in your neighbours.

The study has discovered vulnerabilities that expose states to disinformation attacks: low political trust, soviet nostalgia, vague representation of Russian threat in the public discourse (no practical tools delivered to society to tackle it), low level of civic participation and integration of national minorities.

What Russia does is not so much informational warfare, it’s a war against information. Russia is trying to break our democracy through a war against journalism and electoral systems. So, the solution is in reinforcing media competences, enriching school education with a full course on information security and social networks.